Born as Jeffery Deon Estus in Detroit in 1956 and graduated from Northwestern High School in 1974. He sang second tenor in the choir at Northwestern under the direction of Brazel Dennard. His bass (guitar) teacher was the late James Jamerson of Motown's The Funk Brothers.

Estus joined the R&B band Brainstorm as a teenager, recording two albums with them and scoring a hit with "Popcorn." During the early 1980s, he appeared as a session bassist on several mainstream albums, including Marvin Gaye's 1982 comeback album, Midnight Love. After his bass talents were recognized, he was invited to join the UK pop group, Wham!. He went on to tour China with Wham! and later backed Wham! frontman George Michael on his Faith tour. He also participated in the late-1980s collective, Boogie Box High, which was spearheaded by George Michael's cousin, Andros Georgiou, and featured Michael along with other high-profile musicians; Estus appears on the group's only album, Outrageous, released in 1989. Estus later performed with George Michael at Rock in Rio and has continued to play bass as part of Michael's backing band.

In 1989, Estus released a solo album entitled Spell, produced by Colin Campsie & George McFarlane, with several tracks produced by George Michael. The album's biggest hit was the single 'Heaven Help Me', for which George Michael supplied backing vocals. It reached number 41 in the UK singles chart and number 5 in the US Billboard Hot 100 singles chart. 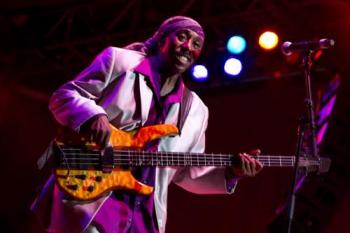