On 13 January 2001, Kim performed live for the first time in a few years as a special guest star in a Fabba concert. During this occasion, she sang five songs: The Name of the Game, Rage to Love, You Keep Me Hangin' On, Kids in America and Thank You for the Music.
Fabba consists of Caroline Illingworth (vocals), Laurie Briggs (vocals), Andy Skelton (guitar and vocals), Glenn Annett (keyboards, vocals) and "backing musicians" Kevin Cartwright (bass, vocals) and Bob Dalton (drums, vocals).
Their repertoire is a selection of Abba songs, performed completely live and with a slighly more rock-oriented edge. 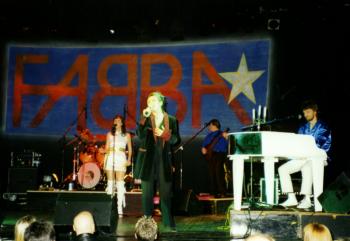