Television series derived from the movie of the same name. Fame was extremely popular during the 1980's which a huge fan following in America and Europe.

The cast actually covered a Kim Wilde song, Young Heroes in the fourth season. The episode is called 'Spontaneous Combustion' and is mostly about the character Miss Sherwood.

Miss Sherwood (Carol Mayo Jenkins) is in the hallway while the kids are dancing and carrying on. She is accidentally knocked down by Cleo and hospitalized. Mr. Morloch is forced to make a rule that there is to be no dancing, singing or music of any kind in the school except of course in the appropriate class rooms for each. This drives Leroy (Gene Anthony Ray) crazy and he goes dancing down the halls one day and is expelled because of it. Miss Sherwood finds out what's going on and when she gets out of the hospital she goes and starts playing the piano in the lunch room to prove that the school is about music and dancing and it's not the same without. That's when Nicole Chapman (Nia Peeples) and Doris Schwartz (Valerie Landsburg) sing Young Heroes. 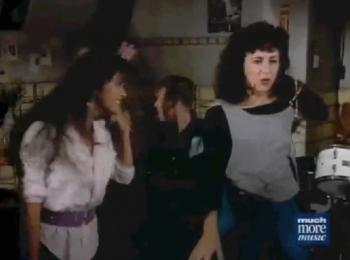