Originally, Kim Wilde did not take to the idea of having a fan club. However, at the very start of her career in 1981, the amount of fan mail soon became too large to deal with in an orderly manner. So in the summer of 1981 the Official World Fan Club for Kim Wilde was set up.

Initially the fanclub offered six magazines per year, but that amount was quickly reduced to four issues a year. In the early 90's a poll was held and the magazines were replaced by irregular "news letters", and an annual magazine at the end of the year. During all this time, Edwina Smith ran the fanclub. From 1995 to 1997 it was done by Melanie Almond. She introduced a new Summer magazine, bringing the amount of magazines per year up to two.

The fanclub was involved with the organisation of the auction at the Kim Wilde fan meeting. At the end of 1997, the fanclub folded. An information service was announced, but it never took on an active form.

Kim about the fanclub

Having a fan club is something I've appreciated more and more. But I have always given it my full attention. 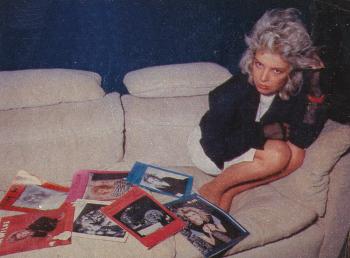