Born in Mitcham, Surrey in 1946, David attended Spencer Park Comprehensive School in Wandsworth. He started work as an architectural designer for several London based architects, designing houses, airports, dams etc, but always longed to design gardens. He has been interested in gardening ever since he was a little boy when he used to help his granddad grow vegetables and flowers on his allotment.

In 1978 he decided to undertake the design and planting for a large development company when he was unhappy with the quality of the design at that time. He has since gained a reputation for his imaginative designed and has won many aways for his designs of private gardens, parklands, new towns and villages.

In January 2001, Kim and David gained a place in the Guinness Book of World Records for the largest ever tree to be transported. A 60 feet tall London Plane was transported from a nursery in Houtvenne in Belgium to a prestigious housing development at Warrington, UK. In July of that year, they win a Gold and 'Best in Show' award at the RHS Tatton Flower Show for the Alice in Wonderland-inspired garden All About Alice. A year later he gains another award for the 'Bilbo Baggins Hobbit Garden from Lord of the Rings', which he designs and creates assisted by Kim Wilde and Julie Toll.

Together with Kim and others he wrote for the Gardens for kids website for some time. 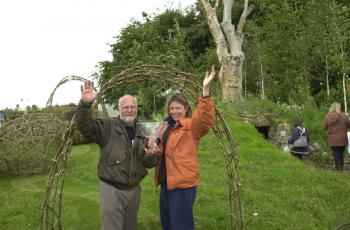 Kim Wilde and David Fountain in 2001