Born in South Africa, Aron Friedman studied classical piano and later formed Nyanga, singing in English and Zulu and performing at the only non-segregated gigs available - in the so called black townships!
Later forced to flee the troubles and avoid army service, Aron arrived in the UK and applied for political asylum. His first major break was a publishing deal with EMI which led to an award at the Tokyo Music Festival for his song "Time". He then started producing tracks for many independent acts before setting up his own labels Perception International and Doctor Vibe.
Aron Friedman has been responsible for some of the most influential club records of the last five years such as 'Happiness' and 'Don't Bring Me Down'. He first became established with his mixes of acts including Take That, Urban Hype, Junior Giscombe, Worlds Apart and Nomad.
Through these jobs he met Damon Rochefort (from Nomad), with whom he formed Serious Rope, a writing and production duo.
Together, they produced some tracks of the Kim Wilde album Now & Forever. On this album, Alan Friedman is also credited for keyboards & programming on Breakin' Away, High on You, Heaven, You're All I Wanna Do and for keyboards & programming and the string arrangement on This I Swear and Hold On.
Aside from the very successful Serious Rope team, Aron continues to remix by himself, a.o. for Ant & Dec ('Falling'), and with DJ Maxie B for Technotronic and the Back Street Boys. 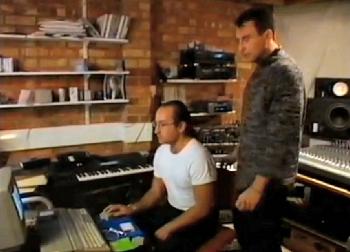