A friend of Kim's called Ruth Shearman, whom she knew since she was eight years old, died from a hereditary disease called Friedreich's Ataxia. This is a rare, inherited disease of the central nervous system first identified in the early 1860's by Nikolaus Friedreich of Heidelberg, Germany.

Symptoms usually begin in childhood or youth, usually with unsteady walking or general clumsiness. Both arms and legs may become weak. Tasks requiring good co-ordination may become difficult. Writing may become impossible, and in time speech may become distorted and faint, and swallowing difficult. People with Friedreich's ataxia may also experience curvature of the spine, diabetes, problems with vision and hearing, and with the heart. They usually need a wheelchair about 15 years after the symptoms start.

The normal gene expresses a protein called frataxin. The effect of the abnormality is to reduce the amount of that protein to a third or less of the levels found in unaffected people. Frataxin appears to be involved in energy production in the mitochondria, tiny bodies within each cell. They produce the energy that the cells need to function and, as a kind of by-product, free radicals. It seems that free radicals and/or excess iron may damage nerve and muscle cells in people with Friedreich's ataxia.

This suggests that a therapy based on improving the way that the mitochondria work, and reducing the number of free radicals may help people with Friedreich's ataxia, and there is research along these lines in the UK, the US and Europe.

Kim has repeatedly asked for help getting funds together to support the medical research needed to find a cure for Friedreich's ataxia. One of these occasions was during the 1996 Fan meeting. The fact that it is one of the less well-known diseases makes it harder to raise money. But good quality research is expensive. In the UK, where Ataxia UK is funding both a clinical trial and research aimed at finding our more about the causes of Friedreich's ataxia, it costs around ?50,000 (circa ?80,000 or $70,000) a year per project. If you would like to help find a cure for Friedreich's ataxia, and to help people live with the condition in the meantime, please contact Ataxia UK.

UK residents can go to the Ataxia website, which contains information on membership and donations for the UK.

For the rest of Europe, check out Euro-Ataxia. 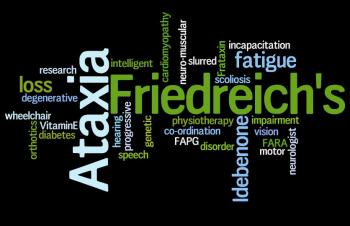