For the song, see Game over

Game Over were a 5 piece band from Melbourne (Australia), founded in 1996 by Adam Linden (vocals), Elton (guitar), Dave Thorn (drums), Dave O'Dwyer (guitar) and Paul Stanway (bass). They started out touring a lot, with overseas bands like Guttermouth, MXPX, No Fun At All, Avail, Lagwagon and Down By Law. They released their first EP 'One down' in 1997, which was followed by the EP 'Shotgun' in July 1998. On this EP they recorded Kids in Australia, a slightly changed cover of Kim Wilde's Kids in America.

Brad Young replaced Linden when he left the band in 1999. During February 2000 the boys supported Millencolin across the East Coast but then Elton had a accident and badly damaged his leg. They did the East Coast support for Pennywise/Frenzal Rhomb during November. Guitarist Elton left the band in early 2001 and was replaced by Ben Webster, but they broke up soon after that, leaving a lot of new recordings unreleased.

In May 2003 they reunited in the original lineup for a show in Adelaide, supporting 99 Reasons Why's final show and also a final show of their own at the Arthouse where it all started for them. 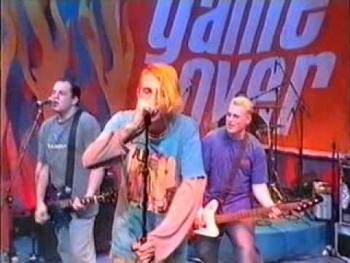 Game Over performing 'Kids in Australia' on Australian TV