Getting On is a satirical British sitcom based in an NHS hospital. It is largely improvised by its cast, who also wrote the series. The series is directed by Peter Capaldi. In it, British comedian Jo Brand plays Kim Wilde, whose name is referred in the series as "not the singer", is a return to work nurse, who must adapt to the difficulties the modern NHS throws at her, with strange managers, form-filling, and political correctness. Vicki Pepperdine plays the "tough but fair" doctor on the ward, and Joanna Scanlan plays Den, the ward sister. Ricky Grover has a supporting role as Matron Hillary Loftus, the matron of the aged care facility.

The show has received high praise from television critics across the board in the UK, with praise for the actors' performances, and the gritty, realistic portrayal of an NHS hospital. Jo Brand, Joanna Scanlan and Vicki Pepperdine were nominated for the 2009 Royal Television Society Award for Best Writing in Comedy. Both Jo Brand and Joanna Scanlan were nominated for the 2010 BAFTA Television Award for Best Female Performance in a Comedy Role.

According to Jo Brand, 'I did this thing called Britain Sings Christmas. I met Kim on that and I said to her, 'I'm going to be doing a series and I'm going to be called Kim Wilde,' and she said, 'can I come and be in a bed?'. So we've got her in mind, to slot her in in a Hitchcockian kind of way and not even mention it. She could sing Kids In America while we tranquillise her.' (1) 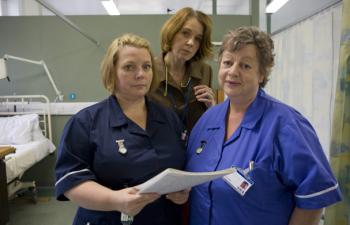