Born as Paul Gadd on May 8, 1940, Banbury, Oxfordshire, England. One of the leading figures of the '70s UK glam rock scene, he began his career in a skiffle group, Paul Russell And The Rebels. He then became Paul Raven, under which name he recorded an unsuccessful debut for Decca Records, Alone In The Night. His cover of Tower Of Strength lost out to Frankie Vaughan's UK chart-topper, after which he spent increasingly long periods abroad, particularly in Germany.
During the late '60s, having been signed to MCA Records by his former orchestral backing leader and now MCA head Mike Leander, he attempted to revitalize his career under the names Paul Raven and Monday, the latter of which was used for a version of the Beatles? Here Comes The Sun, which flopped. Seemingly in the autumn of his career, he relaunched himself as Gary Glitter, complete with thigh high boots and a silver costume. His debut for Bell Records, "Rock N Roll Part 2" unexpectedly reached number 2 in the UK and climbed into the US Top 10. Although he failed to establish himself in America, his career in the UK traversed the early '70s, stretching up until the punk explosion of 1977. Among his many UK Top 10 hits were three number 1 singles: "I'm The Leader Of The Gang (I Am)", "I Love You Love Me Love" and "Always Yours". After a divorce of his wife of nine years, Ann, with whom he had two children, he spent a short time living in Australia. Glitter went bankrupt owing £170,000, but bounced back in the 1980s, scoring a 1984 hit with the single 'Dance Me Up'. The singer turned to Buddhism, became a vegetarian and took his show back on the road.
In 1986 Gary needed hospital treatment after taking an accidental overdose of sleeping pills. Then his third drink-driving conviction brought a 10-year ban and he narrowly escaped jail.
In 1997, just as he was about to do a couple of live shows he was arrested for having child pornography files on the harddisk of his PC. He was subsequently convicted and put in jail for a couple of months in 1999. He then fled to Cuba, and subsequently went to live in Vũng Tàu in Vietnam in March 2005. In November he was charged with committing indecent acts with two girls of 10 and 11 years of age.
In August 2008 he was released from prison in Vietnam. After some delay he flew back to England. In February 2015, he was found guilty of a string of child sex crimes in the UK, including attempted rape, and jailed for 16 years.

Kim Wilde has told her fans in the past that the first record she ever bought was a Gary Glitter album.

Gary Glitter was my favourite. I was in his fanclub. 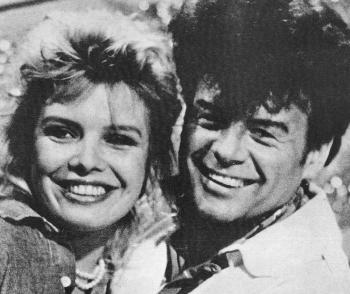