Peter Cox (born 17 November 1955; vocals) and Richard Drummie (guitar/keyboard/vocals) were a songwriting partnership before forming Go West in 1982. The publishers, ATV Music, had teamed them up to write with artists such as Peter Frampton and David Grant. Chrysalis signed the duo and the result was a string of quality pop-rock hits in 1985 with 'We Close Our Eyes', 'Call Me', 'Don't Look Down' and a successful debut album. Sylvester Stallone heard the latter and liked it, and they wrote 'One Way Street' for the Rocky IV Soundtrack. The songs were well-crafted, well-arranged and produced and they used a regular session crew of talented and innovative players. Cox's voice was strong and distinctive and the Godley And Creme video for 'We Close Our Eyes' was extremely innovative.
The second album 'Dancing on the Couch' featured a collaboration with Kate Bush called 'The King Is Dead'. Unfortunately, this didn't help the album, which was a flop.

'Indian Summer' came after a lengthy gap, many had assumed they had lost their momentum, but they demonstrated that they had developed and matured since they were first viewed as pop pin-ups. Their song for the motion picture 'Pretty Woman', called 'King of Wishful Thinking' was a big hit in the UK and the US, proving that they were able to produce hits over a longer period of time.

They released their 'best of' compilation 'Aces & Kings' in 1993. Since then, Richard Drummie has been behind the scenes working with artists such as Billie Myers and Debbie Gibson. In 1994 Peter Cox moved to California and in 1997 issued his debut solo album 'Peter Cox' in the UK, from which no less than 3 singles were released, all attaining Top 40 status in Britain.
Go West appeared with Kim Wilde in the Here and Now Tour 2001. 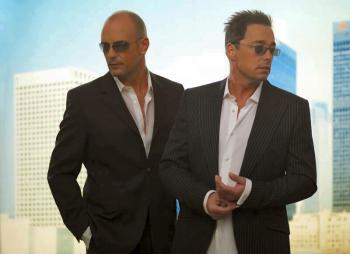