Born in Birmingham, England, September 15, 1956. Jaki Graham is a soul artist who sang at school before taking a secretarial position. In the evenings she continued her singing in a band called Ferrari with David Dee Harris (later of Fashion), before moving on to the Medium Wave band. She was spotted there by Rian Freshwater, who managed David Grant (ex- Linx) and singer/producer Derek Bramble (Born 1962, London, England) formerly of Heatwave who became her producer and songwriter. She signed to EMI, who released her debut 45 "What's The Name Of Your Game" (1984). Her first chart appearance came via a duet with production stablemate David Grant on "Could It Be I'm Falling In Love" in 1985. She followed up with solo hits "Round And Round", "Heaven Knows", before another Grant duet "Mated" (written by Todd Rundgren). The second album provided a trio of hits; "Set Me Free", "Breaking Away", and "Step Right Up".
On Kim Wilde's Love moves album, Jaki provided backing vocals for the tracks
In Hollywood and the singles World in perfect harmony and I can't say goodbye. 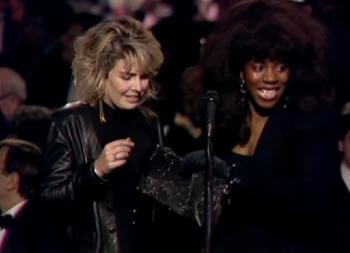