Green Jelly formed in 1981 in Buffalo, New York, USA. They focused on performing ridiculous stage shows in local punk clubs. After a few years, they decided to move to Hollywood to start over and attract new audiences. After many shows this finally led to a record deal in Los Angeles.
In 1992, the debut album 'Cereal killer' was released. The album went gold in the U.S., Canada and New Zealand, and platinum in Australia. This was partly thanks to the single Three little pigs, which was accompanied by an incredible cartoon-style video.

Kim Wilde was actually handling one of the three little pigs during a live performance of 'Three little pigs' in Countdown. Green Jelly's career continued with the second album '333', to little chart success outside the US. 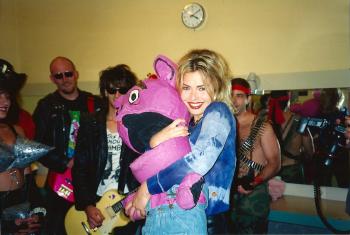 Kim Wilde and Green Jelly in the 'Countdown' dressing room, 1993