Born on 2 June 1960 in London (UK), Anthony Patrick (Tony) Hadley co-founded Spandau Ballet in 1976 as The Cut, with Gary Kemp, Steve Norman, John Keeble and Michael Ellison, all of whom were students at Dame Alice Owen's Grammar School. As a member of Spandau Ballet, Hadley went on to enjoy international success in the 1980s, including hits such as 'True', 'Gold' and 'Through the Barricades', as well as appearing at Live Aid in 1985.

Spandau Ballet disbanded in 1990 after their final studio album, 'Heart Like a Sky', failed to live up to the critical and commercial success of their earlier albums, such as 'True' and 'Parade', and was not released in the United States. In April 1999, Hadley, along with fellow band members Steve Norman and John Keeble, failed in their attempt to sue Gary Kemp, the band's songwriter, for a share of his royalties. On 25 March 2009, it was confirmed that the band had reformed with Hadley and were embarking on a tour of the UK and Ireland in October 2009. Hadley remained a member of the band intermittently until 2017, when he announced his permanent departure, later saying "I'd rather be happy on my own than be in that band again."

Hadley's solo career started in 1992, after Spandau Ballet first disbanded. When his solo albums were less successful, he collaborated with several dance acts such as Tin Tin Out, Marc et Claude and the Disco Bros., as well as participating in live tours, such as the Here & Now Tours in the UK.

In 2011, Tony Hadley starred in the movie Shoot The DJ, which also featured Ricky and Kim Wilde. In 2013, Hadley joined Kim Wilde, Bananarama and Go West to set a new world record for Comic Relief when they performed the highest ever gig, singing on a Boeing 767 aeroplane at 43,000 ft (13,000 m).

In 2016, a deluxe version of his 'Christmas Album' featured a version of Have Yourself A Merry Little Christmas as a duet with Kim Wilde. A year later, they performed the song live during Let's Rock Christmas. 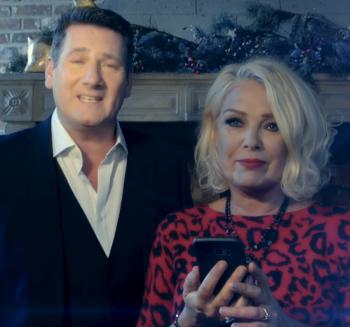