Born as Jean-Philippe Smet on 15 June 1943. Hallyday's father, Léon Smet (1908–1989), was Belgian; his mother, Huguette Clerc (1920–2007), was French. Hallyday took his stage name from his aunt Desta's husband and dance partner Lee Hallyday, a pseudonym for Lee Ketcham, an expatriate Oklahoman, performer, and MC at the Café de Paris where Johnny began his singing career. Johnny was raised by Desta and Lee from a very young age, with Lee being his first manager.

Influenced by Elvis Presley and the 1950s rock n' roll revolution, Hallyday became famous in the 1960s for singing Rock 'n' Roll in French. His debut single, 'Laisse les filles' was released on the Vogue label in March 1960. His first album, Hello Johnny, was released in 1960. In 1961 his cover of 'Let's Twist Again' sold over one million copies, and was awarded a gold disc. He appeared on the American The Ed Sullivan Show with American singing star Connie Francis in a show that was taped at the Moulin Rouge nightclub in Paris. He also staged many appearances in the Paris Olympia under the management of the late Bruno Coquatrix. For their first concert, The Jimi Hendrix Experience opened for Johnny Hallyday in Évreux on 13 October 1966.

In 1982, Kim and Johnny performed the Elvis song Teddy Bear in the French TV programme Formule 1+1. According to French reports at the time, Johnny was very impressed with Kim's talent.

Hallyday completed 181 tours, had 18 platinum albums, and sold more than 110 million records worldwide, making him one of the world's best-selling artists of all time. Hallyday has been called "the French Elvis". He remains largely unknown outside the Francophone world, thus earning the nickname "the biggest rock star you've never heard of" in English-speaking countries.

In March 2017, the singer revealed that he was being treated for lung cancer, diagnosed a few months earlier. Despite rumours that he wouldn't perform live anymore he toured in Belgium, Switzerland and Paris in June. The last performance took place on 5 July 2017. During the night of 5/6 December 2017, Hallyday died at age 74. 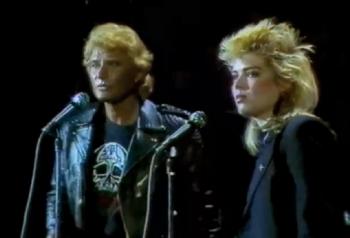 Kim and Johnny Hallyday in 1982