Hausmylly was founded in Viitasaari (Finland) in 1989 by DJ's Enzo (Hannu Pulkkinen), Micky (Mika Kauppinen) and Psycho (Pekka Mykkänen). Psycho left the band a year later, when the line-up changed to include Drome (Jari Karjalainen), Lowland (Petri Alanko) and Jakke (Jarmo Valkeinen). They released their debut album 'Schysteeemi' in 1990. It was a hit in Finland, reaching number 11 in the albums chart. A remix album followed the next year. The next album, 'Sä oot jees' featured more 'serious' songs, although one of the tracks featured band member Drome imitating a coffee machine. In 1993, they released 'Rakasta - ei rakasta', a third album of original material.

The year 1994 brought 'Peilipallo' ('Mirror ball'), an album of cover versions plus two original compositions by the band. Cover versions include 'I Won't Let the Sun Go Down on Me' (Nik Kershaw), 'The Look of Love' (ABC), 'Girls on film' (Duran Duran) and Kim Wilde's You Came. All of the tracks are in Finnish, and Kim's song appears here as 'Niin Tein'.

Two further albums of original material followed: 'Tahdonvoimaa' (1995) and 'Speedway' (1997), after which the band went on hiatus. They reunited in 2002, until they broke up again in 2007. In 2015 they reunited once again. They continue to tour in a line-up featuring new member Tero with Enzo and Jakke. 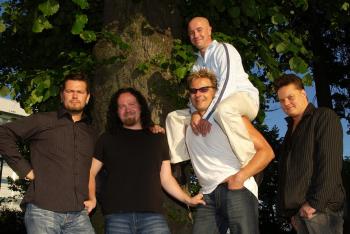