Brothers Eddie Holland (Born 30 October 1939) and Brian Holland (15 February 1941) and Lamont Dozier (16 June 1941 - 8 August 2022) formed one of the most successful composing and production teams in popular music history. All three men were prominent in the Detroit R&B scene from the mid-50s; Brian Holland as lead singer with the Satintones, his brother Eddie with the Fideltones, and Dozier with the Romeos. By the early '60s, they had all become part of Berry Gordy's Motown concern, working both as performers and as writer/arrangers. After writing the Marvelettes' 1961 hit 'Please Mr Postman', Brian Holland formed a production team with his brother Eddie, and Freddy Gorman. In 1963, Gorman was replaced by Dozier, and the trio made their production debut with a disregarded record by the Marvelettes, 'Locking Up My Heart'.

Over the next five years, the three wrote and produced scores of records by almost all the major Motown artists, among them a dozen US number 1 hits. Although Smokey Robinson can claim to have been the label's first true auteur, Holland/Dozier/Holland created the records that transformed Motown from an enthusiastic Detroit soul label into an international force. Their earliest successes came with Marvin Gaye, for whom they wrote 'Can I Get A Witness?', 'Little Darling', 'How Sweet It Is (To Be Loved By You)' and 'You're A Wonderful One', and Martha And The Vandellas, who scored hits with the trio's 'Heatwave', 'Quicksand', 'Nowhere To Run' and 'Jimmy Mack'. Subsequently they were ordered by Berry Gordy to construct suitable songs for the wispy, girl-like vocal talents of Diana Ross, they produced 'Where Did Our Love Go?'. The record reached number 1 in the USA, as did its successors, 'Baby Love', 'Come See About Me', 'Stop! In The Name Of Love' and 'Back In My Arms Again'. In 1966 the Supremes had their eighth number one hit in the USA with You keep me hangin' on, a song that would become Kim Wilde's biggest success twenty years later.

Holland/Dozier/Holland also produced and wrote for the Four Tops: 'Baby I Need Your Loving' and 'I Can't Help Myself' illustrated their stylish way with uptempo material; '(It's The) Same Old Song' was a self-mocking riposte to critics of their sound; while 'Reach Out I'll Be There', a worldwide number 1 in 1966. Besides the Supremes and the Four Tops, Holland/Dozier/Holland found success with the Miracles, Kim Weston, and the Isley Brothers.

In 1967, when Holland/Dozier/Holland effectively commanded the US pop charts, they split from Berry Gordy and Motown, having been denied more control over their work and more reward for their labours. Legal disputes officially kept them out of the studio for several years, robbing them of what might have been their most lucrative period as writers and producers. They were free, however, to launch their own rival to Motown, in the shape of the Invictus and Hot Wax labels. Business difficulties and personal conflicts gradually wore the partnership down in the early '70s, and in 1973 Lamont Dozier left the Holland brothers to forge a solo career. Invictus and Hot Wax were dissolved a couple of years later, and since then there have been only occasional reunions by the trio, none of which have succeeded in rekindling their former artistic fires.

Lamont Dozier sent a Telemessage on June 2, 1987 to Kim Wilde congratulating her with her number 1 hit in the USA with 'You keep me hangin' on'. (Pictured here) 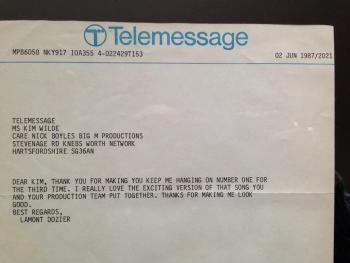