In 1990, Kim Wilde moved from an apartment in London to her current home. She found it in 1987, when she was browsing a few local newspapers. Kim decided on checking out some of the advertised barns. Soon after, she decided on buying one of the barns in the Hertfordshire area, and redesigning it with an architect.

The house is a 16th century Grade II listed barn, which used to be a chicken farm. After almost three years the barn got into shape and Kim herself got involved in designing the garden and building the pond in it. After having her children, the garden changed shape again, with the pond disappearing and making way for another section of the garden. A treehouse was built for the children as well.

The barn has already been visited a few times by the press, including Hello! Magazine (UK) and a Dutch TV show. It was also the background in a rockumentary to promote Kim Wilde's 2010 album Come Out and Play.

Occasionally, fans do turn up at the house, but Kim makes it clear that they're 'most unwelcome'.

Kim about her house

I found it five years ago. There were chickens running around then. (...) The first time I walked in, the sun was streaming in through some of the boards, which were mislodged. It was the most peaceful place I'd ever walked into in my life. I said 'I've got to live here'. Then we took a year and a half renovating it. We moved in on my 30th birthday, had a big party... I slept on the floor and I continued to sleep on the floor until I bought myself a bed and that's only because I got married! (TV Show op reis, January 30, 1997) 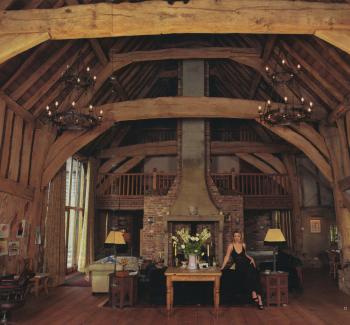 Kim posing in her living room for Hello! magazine (UK), 1996