The Human League are a British synthpop/new wave band. Formed in Sheffield in 1977, it was originally an avant-garde all male synthesizer-based group. The only constant band member since 1977 is vocalist and songwriter Philip Oakey (born 2 October 1955 in Hinckley, Leicestershire, England). Together with Martyn Ware (born 19 May 1956 in Sheffield, Yorkshire, England) and Ian Craig Marsh (born 11 November 1956) he formed the band. The latter two were both working as computer operators, and combined a love of pop music (such as glam rock and Tamla Motown) with avant-garde electronic music acts such as German group Kraftwerk.

Early sessions were awkward. Oakey had never sung in front of an audience before and couldn't play keyboards. Listening to one of Ware and Marsh's demos, Oakey was inspired to write some lyrics which he later delivered in his unique baritone style, the lyrics would later become the single 'Being Boiled'.
In this first formation, the Human League released an EP, 'The Dignity of Labour' (1979), consisting of four experimental instrumental tracks.
The album 'Reproduction' (1979) followed. This album and the accompanying single 'Empire State Human' flopped. The Human League enjoyed more success with the EP 'Holiday '80' (1980), containing the previously mentioned 'Being Boiled'. They performed this track on Top of the Pops. More success followed during a UK tour and the release of 'Travelogue' in May 1980.

By the end of 1980 though, internal disagreements and a perceived lack of support from record company Virgin led to the group's disintegration. Ware and Craig Marsh left the band, later starting up their own new band, Heaven 17. Phil Oakey kept the 'Human League' name. Unfortunately, it was two weeks before an important UK/European tour, so Oakey had to move fast to avoid huge debts as a result of cancellation. He had only a few days to recruit new members.

Oakey and his then-girlfriend visited various venues in Sheffield to look for suitable replacements. In the Crazy Daisy Nightclub they spotted two teenage girls dancing together on the dance floor. Susanne Sulley (born 26 March 1963) and Joanne Catherall (born 18 September 1962) were just two 17 year old schoolgirls on a night out together. Neither had any experience of singing or dancing professionally. Oakey asked both girls to join the tour as dancers and incidental vocalists. Originally just wanting a single female singer to replace the high backing vocals originally provided by Martyn Ware, he says that he thought having two female vocalists/dancers would also add potential glamour to the band. In addition to the girls, Oakey employed professional musician Ian Burden as a session keyboard player for the tour to cover for the keyboards of the now departed Ware and Craig Marsh. The success of the tour wasn't very big, as the press wrote with derision about "Oakey and his dancing girls". Nevertheless, Sulley and Catherall were made full members of the band, and they have been ever since.

The fortunes of Human League turned in 1981, when the classic album 'Dare' and the multi-million selling single 'Don't You Want Me' were released. From then on, the group released the albums 'Hysteria' (1983) and 'Crash' (1987). Singles like 'Mirror Man', '(Keep Feeling) Fascination', 'The Lebanon' and 'Life on Your Own' were Europe-wide hits.
In 1988 a greatest hits compilation was made, at the end of a very successful run of hits throughout the Eighties. The band meanwhile constructed their own purpose built studios in Sheffield, jointly funded by Oakey and a business development loan from Sheffield City Council. Oakey believed if the band owned their own facilities it would cut down on the enormous production costs of previous albums and the band could become more productive.

The last album with Virgin was 1990's 'Romantic?', spawning only one minor hit single, 'Heart Like a Wheel'. It was the beginning of a troublesome time for the band, because they were dropped by Virgin. After a couple of years they regained confidence to send out demos to other labels. They were signed by EastWest records in 1994. In January 1995, their first single with EastWest, 'Tell Me When' was a big success in Europe and the UK. The accompanying album, 'Octopus', returned the band to the top 10 and was awarded silver. Further singles 'One Man in My Heart', 'Filling Up With Heaven' and the non-album single 'Stay With Me Tonight' were all reasonably successful as well. A remix version of 'Don't You Want Me' and a new Greatest Hits compilation were less successful. A change of management at EastWest led to the group's contract being cancelled.

In 2000 the band signed to Papillon records, a label of the Chrysalis group. The album 'Secrets' (2001) was released just before Papillon developed financial troubles and then being closed by Chrysalis. The album was not promoted and didn't sell too well as a result. The band decided to focus more on touring since then. Starting out with the 'Secrets tour' in 2001, they joined the Here & Now Christmas Party Tour in 2002, together with Kim Wilde amongst others. In 2003, they played during the Here & Now Tour in Australia, also together with Kim, who commented in her tour diary: "I melt every time I hear Human, and love Fascination. Phil's voice is strong and hasn't changed at all, and what can I say about Jo and Suzanne. They're legends!"

For some time, the Human League were unsigned to a record label, but continead to play live. In 2010, they signed to Wall of Sound records and released their tenth studio album 'Credo' the next year. Human League continue to play live, while several of their older studio albums have had expanded and remastered re-releases. 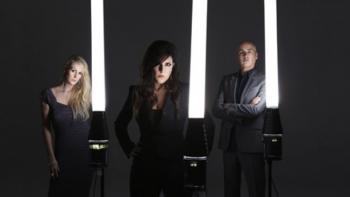