Born 17 September 1951 in Akron, Ohio (USA), Chrissie Hynde came to England to seek her fortune during the early 1970's. After meeting with New Musical Express writer and future boyfriend Nick Kent she joined the paper and gained entrance into the world of rock. She worked at Malcolm McLaren's shop, SEX, played with Chris Spedding, joined Jack Rabbit, formed the Berk Brothers and made a tasteless, unreleased single as the Moors Murderers. By the time she assembled the band in 1978, Hynde had gained a great deal of experience. The first Pretenders' line-up comprised: Pete Farndon (born 2 June 1952, Hereford, England, died 14 April 1983; bass), James Honeyman-Scott (born 4 November 1956, Hereford, England died 16 June 1982; guitar) and Martin Chambers (born 4 September 1951, Hereford, England; drums). Their debut was a Nick Lowe produced version of the Kinks' 'Stop Your Sobbing' in 1978. It scraped into the UK Top 40 the following year, having received critical praise and much interest. 'Kid' and 'Brass in Pocket' followed. The latter reached the number 1 position in the UK.

It was their self-titleed debut album that eventually put them on the road to becoming one of the decade's most important groups. In addition to their previous singles the album contained the reggae-styled 'Private Life' (later recorded by Grace Jones), the frenetic Precious, the Byrds-like 'Talk of the Town' and the beautiful ballad 'Lovers of Today'.

Throughout 1980 they became a major stadium attraction in the USA; it was in America that Chrissie met and fell in love with her musical idol, the Kinks' Ray Davies. Davies had already expressed an interest in Hynde during an interview in the rock magazine Dark Star. Their tempestuous relationship lasted four years, almost resulting in marriage. Davies stated that they had gone to a registry office by bus but spent so much time arguing that they changed their minds and came home. During their romance they brought each other onstage to play with their respective bands. 'Pretenders II' came in 1982; it was another collection of melodious rock played with new-wave enthusiasm. Singles taken from this album were 'Message of Love' and 'I Go to Sleep', first recorded by the Applejacks in 1964. During the turbulent month of June, Pete Farndon, whose drug abuse had been a problem for some time, was fired. Two days later Honeyman-Scott was found dead from a deadly concoction of heroin and cocaine.
Nine months later Hynde gave birth to a daughter; the father was Ray Davies. Two months after this happy event, tragedy struck again. Pete Farndon was found dead in his bath from a drug overdose.

The new full-time Pretenders were Robbie McIntosh (ex- Average White Band) on lead guitar, and bassist Malcolm Foster. They set about recording a third album and the band ended the year with another hit single, the Christmassy '2000 Miles'. 'Learning to crawl' was released at the beginning of another successful year. The album was erratic, but it did contain some gems, notably the epic 'Thin Line Between Love and Hate', the powerful 'Middle Of The Road' and the melodic, yet poignant tribute to Honeyman-Scott, 'Back on the Chain Gang'. The band embarked on another US tour, but Chrissie refused to be parted from her baby daughter who accompanied her, while Davies and his band were touring elsewhere. In May 1984, following a whirlwind affair, Hynde married Jim Kerr of Simple Minds. Back with the Pretenders she appeared at Live Aid at the JFK stadium in Philadelphia, and would enjoy success under her own name duetting with UB40 on the chart-topping reggae re-make of Sonny And Cher's I Got You Babe.

Following the birth of another daughter (Jim Kerr is the father), Chrissie effectively dismantled the band. 'Get Close' was released at the end of 1987 and was well received. Both 'Don't Get Me Wrong' and 'Hymn to Her' were substantial hits. In 1988 a solo Hynde performed with UB40 at the Nelson Mandela Concert and the subsequent duet 'Breakfast in Bed' was a Top 10 UK hit. Hynde has since spent much of her time campaigning for Animal Rights. Her marriage to Kerr collapsed and in 1990 she returned with a new album 'Packed', still as the Pretenders. It was another critical and commercial success, demonstrating Hynde's natural gift for writing tight, melodic rock songs. 1994 brought 'Last of the independents', featuring the hit I'll Stand By You which saw her reunited with drummer Martin Chambers, alongside Adam Seymour (guitar) and Andy Hobson (bass).
The 'Unplugged'-style album 'Isle of View', released in 1995, showed the Pretenders in a whole different setting, rearranging songs to acoustic masterpieces.

Hynde is one of Kim Wilde's favourite female recording artists. On 24 March 2007, she took the place of Chrissie Hynde when she sang I Got You Babe together with UB40's Ali Campbell during a live event in Brussels called Stars of Europe. She also recorded a cover version of I'll Stand By You on her album Snapshots. 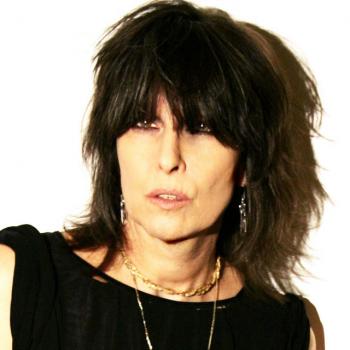