The Jonas Brothers were an American pop rock band. Brothers Joe, Kevin and Nick Jonas formed in early 2005. After being signed to Columbia, the brother considered the name 'Sons of Jonas' before settling on the name 'Jonas Brothers'. After several tours, opening for artists like Backstreet Boys, Kelly Clarkson and the Veronicas, their debut album 'It's about time' was released in August 2006. It was a limited release of only 50,000 copies. Because Columbia weren't interested in further promoting the band and the album, the Jonas Brothers switched labels a year later to Hollywood Records. In March 2007, their song Kids of the future, a version of Kim Wilde's Kids in America, was released on the soundtrack album of Meet the Robinsons. The Disney Channel actively promoted the band throughout the year, whereas their second self-titled album (also including 'Kids of the future') was released in August 2007. The Jonas Brothers kicked off their 'Look me in the eyes tour' on January 31, 2008 in Tucson, Arizona. They performed several new songs on the tour that were slated to be on their third studio album, 'A little bit longer', released in August 2008.

In the summer of 2008 they also starred in the Disney Channel Original Movie Camp Rock and its sequel, Camp Rock 2: The Final Jam. They also starred as Kevin, Joe, and Nick Lucas, the band JONAS, in their own Disney Channel series JONAS, which was later re-branded for its second season as Jonas L.A. The show was eventually cancelled after two seasons.

Their fourth album, 'Lines, vines and trying times' was released in June 2009. After a hiatus during 2010 and 2011 to pursue solo-projects, the group reconciled in 2012 to record a new album, which was announced in early 2013 with the title 'V'. On October 9, 2013, the group cancelled their highly anticipated comeback tour days before it was slated to start, citing a "deep rift within the band" over "creative differences". Three weeks later, the group confirmed that they had split and 'V' was not going to be released, although some tracks were actually made available to fans as part of an album that also featured live tracks. 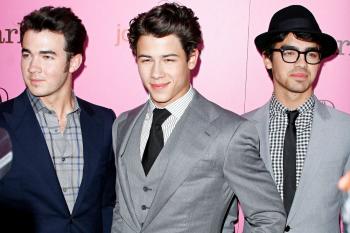