The band Ken was started in 2001. Following a number of experiments and recordings with a number of musicians, the band finally settled in its first line-up of Michael Fritsche, Oliver Lauxen, Guido Lucas and Oliver Fries. Kurt Ebelhäuser joined them during 10 days of recording sessions and wrote two tracks, 'Swell' and 'Husk', which were immediately added to the final 14 recordings. Both songs were created within minutes and easily found their way onto the debut album, 'Have a nice day', which was released in June 2002. After just two concerts, Oliver Lauxen left the band, not wanting to tour anymore, having had his share when he was part of the band Scumbucket. Michael, now a father of four, also had difficulty in being able to tour. He was replaced by tour drummer Markus Krieg. Following a few festivals in 2002, Ken went on the Hurricane/Southside club tour throughout the month of October.

Recording duties resumed in 2004, for the second album 'I Am Thief'. During this year the band recorded about 16 cover versions.
At the end of the year Ken was ready to start working on a proper new album. This time the line-up consisted of Guido Lucas, Oliver Fries, Georg Brenner, Marcel von der Weiden and Jens Küchenthal. The album was again recorded in 10 days, just like the debut album. Released as 'Stop! Look! Sing Songs of Revolution!' together with 'I Am Thief', Ken was ready to take on the world again.

The album 'I Am Thief' contains a cover of Kim Wilde's song View From a Bridge. 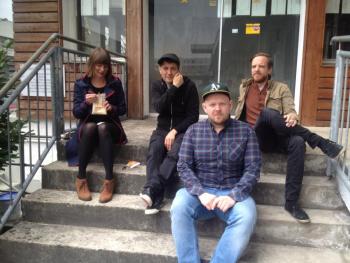