In 1993 there were reports of "Kim's newest lover" in the English tabloids. Rupert Kenyon, aged 22, was a University student in psychology and business. Kim met him when she was taking a skiing holiday in the French resort of Val D'Isere.
The relationship lasted for some time but was ended by the end of that year.

I was on a ski holiday with my very best friends from school. We used to do it years ago, whole groups of us, where we would hire a place and get outrageously drunk and attempt to ski very badly the next day. Last year someone suggested we do it all again and I doubted whether we could get this old ghost going again. It did and I was so happy. One night we went to a nightclub and I met him. He picked up on my energy because I picked up on his. He was an open, happy person. Actually he was very obnoxious but in a sweet way. He was loud and loutish and taking the p.... very gently. I could tell it was front and then I knew he was a good person. In a split second. I trusted him right away. It's always in the eyes and I just remember his eyes. That was it. It is a great thing. It's always good to find a soulmate. (1)

I've been seeing Rupert since the beginning of the year but I couldn't start to explain why I am really with him. You have a mysterious chemistry with some people which sometimes goes beyond understanding. Women would do a lot better if they just listened to their instincts - whether the guy is ten years younger or ten years older. It's thanks to Rupert that I have a much more positive attitude to life. (2)

He is studying psychology and business, although he doesn't know what he'll do after that. He has a very open mind. He is someone who is a very happy person. The age difference doesn't worry me at all. Maybe the UK press would make a big deal out of it. We're just very happy. (3)

She's a gorgeous, down-to-earth woman, and we had a great year together. (4) 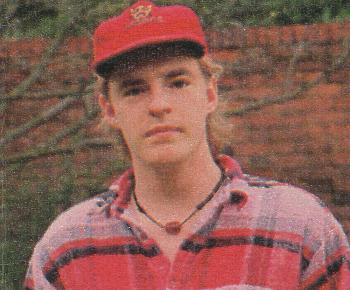