Born 1 July 1960, Bronx, New York (USA). A former office cleaner at Gamble And Huff's Sigma Sound studios, King was nurtured by T. Life, a member of the company's writing and production staff. He coached the aspiring singer on recording technique and was instrumental in preparing King's career. Her debut single, 'Shame', was released in 1977 and after considerable success on the dance/club circuit - since regarded as a classic of its kind - it finally broke into the national pop charts the following year, reaching the US Top 10/UK Top 40. Evelyn's second hit, 'I Don't Know If It's Right', became the artist's second gold disc and she later scored international hits with 'I'm In Love' (1981) and a UK Top 10 'Love Come Down' (1982). After a disappointing period during the mid-80s, her 1988 album 'Flirt' was generally considered to be a return to form. King has remained a popular performer on the soul/dance music charts.

Kim Wilde recorded and released a cover of King's debut single, Shame in 1996. 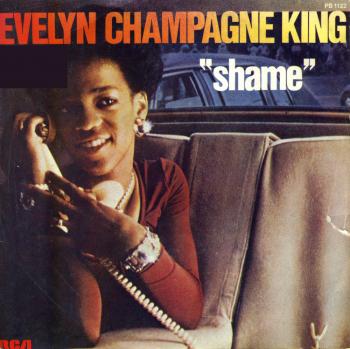