The Larks are Hayley Rodgers and Dan Noble, specialists in stripping down well known, brilliant tunes and performing them with no special effects or electronic additions.

Dan Noble got into music in his teens when he discovered a love for the music of Paul Simon, which inspired him to start learning to play on his dad's old guitar. Hayley Rodgers discovered her musical ear at an early age playing whatever instruments she could get her hands on and singing along to the likes of the Eurythmics and Alison Moyet. Having parents of a similar age, their musical tastes have been heavily influenced by the sounds they were weaned on. Having chosen career paths outside of the music industry, both unaware of each others existence, they both spent their spare time writing, recording and doing covers of their favourite songs in the privacy of their own homes.

A chance meeting between former schoolfriends, Hayley and Dan's wife Janette after not having seen eachother for 23 years led to their meeting. The pair quickly discovered a style encompassing the simplification of otherwise complex sounds and a purity and clarity they have become noted for.

Since The Larks were first established in September 2011, they have been working with acclaimed producer Beanz Rudden of Plutonic Group and were selected to be chosen by the Swiss public to represent Switzerland in The Eurovision Song contest 2014 for their song 'Summer Loving' (co-written and Produced by Beanz Rudden.)

Before that, they recorded a cover version of Kids in America. Originally uploaded to their Soundcloud account in October 2013, it got over 5000 plays within three months. 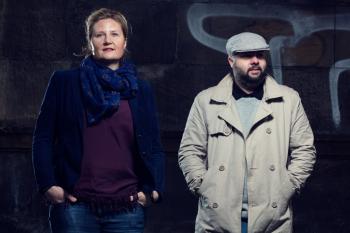