Lasgo is a Belgian dance trio consisting of Peter Luts (Producer, Keyboard player & MC) David Vervoort (Producer, Keyboard player, singer) and Evi Goffin (born February 27th, 1981; frontwoman, singer). Their debut single "Something" immediately became the biggest hype in the clubs in spring 2001. Shortly after, most Dance radios decided to start playing the track on vinyl because they couldn't wait for the commercial CD release. "Something" made its way to the UK in early 2002, after becoming a big hit everywhere else in Europe throughout 2001. The albums 'Som things' and 'Far away' were reasonably successful throughout Europe and even managed to reach the top 20 in the Billboard Dance/Electronic Albums chart.

The voice of Evi has been compared to Kim's a few times in the press, although the similarities are marginal. However, this was a reason for the popular Flemish music magazine 'Joepie' to organise a meeting between the two in December 2001 for an article.

Evy subsequently performed Kim's song Loved during a live concert given to celebrate 10 years of Radio Donna in Belgium on March 29, 2002. Two years later, on April 30, 2004, she performed a reggae version of Kids in America during the Belgian TV programme Biebabeloela.

In 2008, Evi was forced to leave the band. She was replaced by Jelle van Dael. Lasgo's third album 'Smile' was less successful than the first two, with singles scoring mostly in Belgium and Turkey. 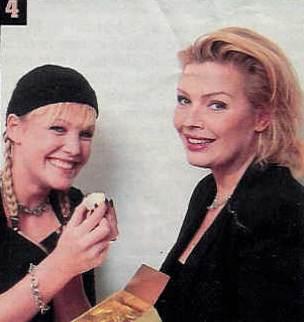