James Last (born as Hans Last on 17 April 1929 in Bremen) is a German composer and big band leader. He learned how to play piano as child, switching to bass as a teenager. He joined Hans-Gunther Oesterreich's Radio Bremen Dance Orchestra in 1946 at age 17. In 1948, he became the leader of the Becker-Last Ensemble, which performed for seven years. After the disbandment of the Becker-Last Ensemble, he became the in-house arranger for Polydor Records, as well as for a number of European radio stations. For the next decade, he helped arrange hits for artists like Helmut Zacharias and Caterina Valente.

Last released his first album, 'Non-Stop Dancing', in 1965. The record consisted of brief renditions of popular songs, all tied together by an insistent dance beat and joyous crowd noises. It was a hit and helped make him a major European star. Last subsequently released over 190 records, including several more volumes of Non-Stop Dancing. On these records, he varies his formula by adding different songs from different countries and genres, as well as guest performers like Richard Clayderman and Astrud Gilberto.

He has won numerous polls and prizes, for example Billboard magazine's 'Star of the Year' trophy in 1976, and has been honored for his lifework with the German ECHO prize in 1994. During the 1990's Last is less active with touring, although he does appear on TV shows and in galas. In 1997 James Last returns from his chosen homeland of Florida to do 16 live concerts. However, in the same year, his wife Waltraud dies, leaving behind James and their two children. He doesn't stop making music: already in 1998 he's back on stage, and even after reaching the stately age of 70 continued to make music.

Among the many tracks he has played with his big band is Kim Wilde's Chequered Love. He played it as part of a medley with the songs 'I've done everything for you' and 'La, la, la, la', most notably on 'James Last in Ost-Berlin', recorded in 1987 and released on DVD in 2004. 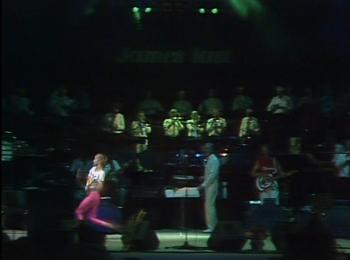