Born in Gillingham, Kent (UK), Matthew Lettley was attracted to drums from the age of six. He started taking lessons at eight, leaving school at the age of sixteen to become a professional drummer. In the summer of 1977, he joined the band Flint. They play in Germany on military bases a lot. They won the British TV talent show New Faces in 1978. The prize was a recording contract with Mickie Most's RAK Records. Unfortunately the band proves unsuccessful commercially. After five years with Flint, Lettley joins Magna Carta for a year. He then works with Judie Tzuke and John Edwards. He becomes increasingly popular as a session musician and works with Elkie Brooks in 1984. In 1986, he joins Kim Wilde's band for the Another Step tour.

The following year, he collaborates with Bob Geldof and embarks with A-ha on their 1988 world tour. Shortly afterwards, he becomes the drummer of David Essex with whom he co-operates for seven years, in the studio or on stage. He plays on stage with the group Four Bills and A Ben, replacing Jeff Rich when the latter is unavailable. In 1991, the French singer Renaud records his new album 'Marchand de Cailloux' in England. At the end of the 90s, he is seen playing with Hank Marvin and participates in the recording of an album by Gary Brooker.

In March 2000 he is asked to replace Jeff Rich in Status Quo's band. He joins them after fulfilling commitments with Hank Marvin. He stays with Status Quo for 12 years. 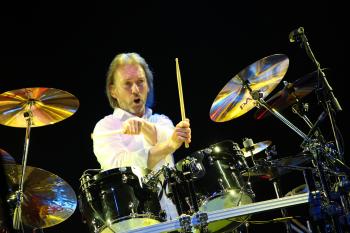