The Maniacs were a West German punk-band, formed in 1982 by Peter Thomas (guitar), Peter Küllmer and Kai-Uwe Schönewolf. Their first demo tape was called ATTACK. Their first singer was Xox, a punk from Götthingen, who'd previously played in the band Krätze. The second singer was Sebastian Lüpfert, who came from Hannover. When the third singer, Matthias Hose left the group, guitarist Peter Thomas took over his duties. After releasing some demos they finally got a record deal with Mülleimer Records and released an LP with them on one side and the punk band Tin Can Army on the other side in 1984. In the same year Thomas Schedensack, a second guitarist joined the band.

In May 1986 they released their second album, 'The White Rose of Resistance'. In October 1986, they made a short tour in France, after which they ended up in the recording studio again and the Single Chainsaw Blues emerged, which was then published in May 1987 with the French independent label Terminal Records.

Their last album 'Thrown to the Dogs' was recorded in 1989 and was published on the Kassel Label Black Fantasy Records in 1990. This album featured a cover version of Kim Wilde's Kids in America, entitled Kids in West Germany. Because of professional reorientation of the band members, the band finally split in 1992. 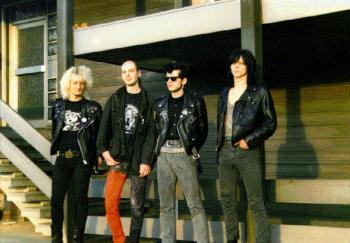