Carol Deirdre McGiffin was born on February 18, 1960 in Maidstone, Kent. She started her broadcasting career in 1988 as co-host of the Chris Evans shows on GLR. In 1991, she got married to Chris Evans, a relationship that ended in separation in 1994 and divorce in 1998. She got to know Kim Wilde in early 1994, just after Kim had a brief relationship with Chris after she worked with him in The Big Breakfast.

In 1995 McGiffin was a founding member of the Talk Radio UK team, co-presenting the popular weekday evening show The Rude Awakening with Moz Dee. The show ended in September 1995. She appeared a year later on Liberty Radio co-hosting the breakfast show with Richard Skinner, which lasted around six months. In 1997 she reappeared again on Talk Radio on the Friday breakfast show with Paul Ross. In 1998 Ross and McGiffin moved to the weekend breakfast slot.

In 2003, Carol moved into television when she joined the panellists at Loose Women on ITV. She subsequently appeared on TV shows like Daily Cooks Challenge, Who wants to be a millionaire and as a regular guest on The Wright Stuff.

In 2010, she released her autobiography 'Oh Carol'.

We met at a hen night, got chatting and realised we had more in common than Chris. We hit it off straight away. Strange life, isn't it? (1)

I even had a really great night with one of those blonde bombshells that had been hanging off of the ex's arm - Kim Wilde. It was at a hen party for a mutual friend. When I turned up there was a bit of tension in the room over the fact that Kim and I were both there. We'd never met previously but I wasn't worried; I didn't have a problem with her and I wasn't particularly interested in what had gone on with Chris. But I knew as soon as I met her that I liked her. She, at the time, was like me, a good-time girl. It was a wild night in more ways than one. The girl whose hen night it was happened to be very well connected and so we ended up being chauffeured around town in a Rolls Royce, first of all to Tramp where Kim and I were photographed by a paparazzi. We were in the car, obviously a little bit drunk. I was smoking and gesturing something to the photographers out of the car window, and it is to this day another of my favourite pictures of all time. Apparently, it was featured on the walls of the Paparazzi Café in Kensington for quite a long time, it was that good a shot. The headline in the Bizarre column of the Sun was funny too: 'Good Evans It's My Two Exes' it screeched. (2) 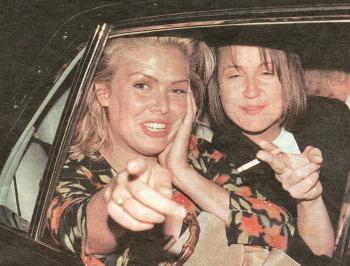