Born 7 November 1943 as Roberta Joan Anderson in McLeod, Alberta, and raised in Saskatoon, Saskatchewan, Joni Mitchell studied art, then became a folk singer, living in Toronto, Ontario, and Detroit, Michigan. She adopted her stage name after marrying musician Chuck Mitchell, whom she soon divorced. In 1967 she moved to New York City, where she signed a contract with American music executive David Geffen, and released her first album, 'Songs to a Seagull'.

In 1968 American singer Judy Collins recorded Mitchell's song 'Both Sides Now', and it became a major hit. Sparked by this success, Mitchell's own records started to sell well. She settled in Laurel Canyon in the mountains above Los Angeles, California, and recorded her best-known albums, including 'Clouds' (1969), with her self-portrait on its cover; 'Ladies of the Canyon' (1970); 'Blue' (1971), often ranked as one of the major records of the decade; and 'Court and Spark' (1974). Her introspective lyrics and adventurous music won her a devoted following, especially among women. Some of Mitchell's best-known compositions were recorded by other artists, including 'The Circle Game' (1968, recorded by American folk singer Tom Rush) and 'Woodstock' (1970, recorded by American folk-rock group Crosby, Stills, Nash & Young).

Later albums, such as 'Hejira' (1977) and 'Mingus' (1979), Mitchell's tribute to jazz bassist Charlie Mingus, expanded her style from folk and rock music into jazz. She continued recording into the 1990s, but never matched the critical or popular success of her early work.

Her song 'Big yellow taxi' is covered by female collegues like Maire Brennan and Amy Grant, and a sample can also be heard in Janet Jackson's single 'Got till it's gone'.

Mitchell is one of Kim's favourite female recording artists. 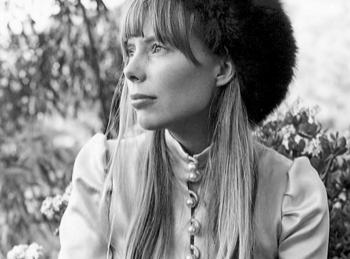