Professional name of Norma Jean Mortenson (1 June 1926 - 5 August 1962), American motion picture actor. A former photographer's model, Monroe, through her blonde beauty, was exploited in a number of minor film roles beginning in 1948. She showed promise as a comedian in bit roles in 'The Asphalt Jungle' (1950) and 'All About Eve' (1950). Her first starring role was in 'Gentlemen Prefer Blondes' (1953). More serious films followed, in which Monroe attempted to break away from the vacuous sex-symbol mold in which she had been cast: 'Bus Stop' (1956), 'Some Like It Hot' (1959), and 'The Misfits' (1961).

In private life Monroe was married to the baseball player Joe DiMaggio and later to the playwright Arthur Miller. Her early death, by suicide, has been attributed to film-world pressure, mafia intrigue and her affair with one of the Kennedy's.

Kim Wilde has often stated her admiration for Marilyn Monroe. She has even re-made some of the photographs taken of Monroe, a.o. on the single sleeves of Time and Million Miles Away. 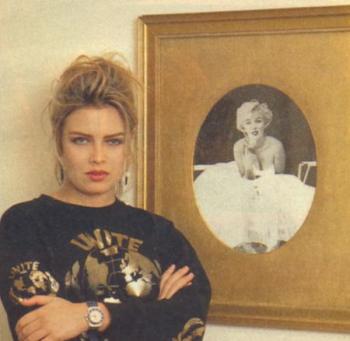