Born 13 February 1933 as Marilyn Novak in Chicago, Illinois, USA, the actress Kim Novak was a cool, sensual blond movie star and sex symbol of the 1950's and 60's.

Her first role in a movie was in 1954 in 'The French Line' alongside Jayne Mansfield. She was then groomed for stardom by Columbia Pictures by chief Harry Cohn, who hoped that she would replace Rita Hayworth as the studio's most attractive actress.

Although inexperienced, she soon became a popular star, and by 1956 she was America's number one box office attraction; she may have been the last "sex goddess" manufactured by the old Hollywood studio system. Novak gained publicity for her supposed romances with celebrities like Frank Sinatra and Cary Grant, but in 1965 she married actor Richard Johnson. The marriage lasted for only a year. Ten years later she married for the second time.
Meanwhile, her popularity decreased until she retired from the screen in the late 70's. In the late 80's she began appearing again in some films and TV productions.

I was named after Kim Novak. My parents were into calling their kids after stars at the time and I think they considered calling me Doris after Doris Day. Doesn't have that certain ring to it though, does it? Doris Wilde... 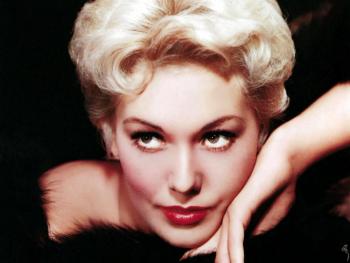