The Belgian band the Peoples was formed in October 2010 by Kurt Even, Peter Goven, Sammy Van de Velde and Dimitri Van de Velde. In 2014 a fifth member, bassist Rox joined the band. They've made a name for themselves as a cover band, performing at birthdays, school parties, weddings and other private parties. They play songs originally performed by Prince, the Beatles, Bruno Mars, Metallica and Coldplay, among many others. One of the songs on their setlist is Kim Wilde's Kids in America, for which they've also created a studio recording and a music video. They have not yet released any records. 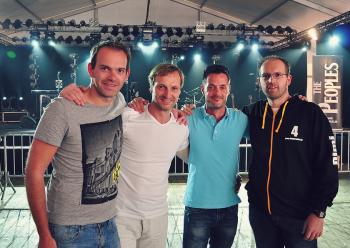