Born as Stacey Lynn Swain on 30 November 1958 in Orange County California. She had formal dance training in the early 1970's and worked in the Dance Theatre of Orange County from 1969 to 1974. At the turn of the decade, Stacey joined the band Q (which changed its name to SSQ after legal wrangles). A four track EP entitled "The Q EP" (1982) and a full-length album "Playback" (1983) were recorded, after which Stacey took on her stage name Stacey Q. She recorded a cassette that was sold at her live shows in 1986. One of the tracks included on this cassette was a version of Kim Wilde's song Dancing in the Dark. It also included an early version of the song 'Two of hearts'. The live shows and the cassette drew the attention of record company Atlantic Records. She signed a contract and started recording her debut album. It included 'Two of hearts', but not 'Dancing in the dark'. The former became a huge hit, opening up Stacey's career - but only briefly. The albums 'Better than heaven' (1986), 'Hard machine' (1988) and 'Nights like this' (1989) showed a steady decline in popularity. A greatest hits compilation in 1995 and a comeback album entitled 'Boomerang' (1997) were attempts to revive her career, but without much success. 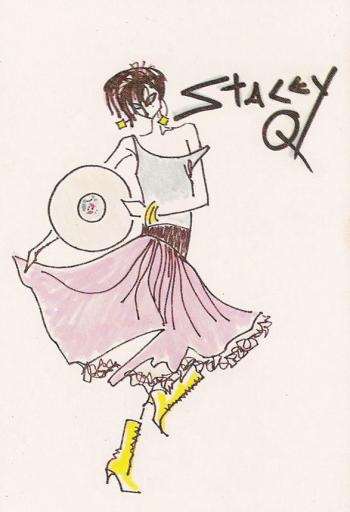 Stacey Q's self-titled cassette, which featured a cover of Kim Wilde's 'Dancing in the Dark'