Founded in 2001 in Biel, Switzerland, the Swiss punk band QL is comprised of Pät (bass, vocals), Stämpf (guitar, vocals), Sägi (guitar), and Tosi (drums). They debuted in 2004 with the album 'Heimatschutz', a collection of covers, performed in Swiss German dialect and in a punk style. The album was a big hit, peaking at number six on the Swiss albums chart. The follow-up albums 'Luscht' (2005) and 'Schwi!zerchracher' (2007) were also big hits, both peaking at number three on the Swiss charts.

Following some time away, QL returned in 2010 with their fourth album, 'Humba Tätärä' (2010), another top five hit. In 2011, they released 'Mach Lut!', which included the track 'Generika', a version of Kim Wilde's Kids in America with alternative lyrics in Swiss German. 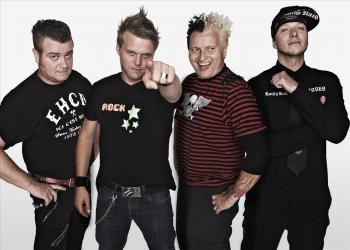