Born into a Catholic musical family, Quatro's father, Art Quatro was a part time jazz musician of Italian descent, while her mother, Helen Sanislay, was Hungarian. Quatro began her musical career in the all-female band Pleasure Seekers and Cradle with her sisters Patti, Nancy, and Arlene. Patti Quatro later joined the band Fanny, one of the earliest all-female rock bands to gain national attention in America. She has a brother, Michael Quatro, who is also a musician.

Quatro moved to the UK in 1971 after being discovered in Detroit by record producer Mickie Most, famous for producing many artists such as The Animals, Jeff Beck, Lulu and Donovan. By this time he had started his own label RAK Records, which made stars of many artists.

Quatro's first single 'Rolling Stone' was a flop everywhere except Portugal, where it made number one. Mickie Most then introduced Quatro to the songwriting/production team Nicky Chinn and Mike Chapman. Her second single 'Can the Can' (1973) was a number one hit throughout Europe and in Australia. It was followed up by another major hit: 48 Crash (1973). The singles 'Daytona Demon' (1973) and 'Devil Gate Drive' (1974) were just as successful. Her first two albums were also huge European and Australian successes.

These recordings, however, met little success in her native U.S., despite her tours in the mid-1970s supporting Alice Cooper, and, except in Australia, the popularity of Quatro's hard rocking glam rock style declined rapidly from 1975. Meanwhile, she did enjoy some success as a session player.

Quatro's fortunes did not revive until 1978 when 'If You Can't Give Me Love' was a Top Ten hit in the UK and Australia. Though this still failed to break Quatro in the States, when she joined Chris Norman of Smokie in 1978 for 'Stumblin' In', she had a #4 hit there with RSO Records. This success was very brief and her last solo hit (and that only in Australia) was 'Rock Hard' in early 1981.

In February 2006, Quatro released 'Back to the drive', which was produced by Sweet guitarist Andy Scott. The album's title track was written by Mike Chapman. Later that year, a documentary chronicling Quatro's life and career, 'Naked Under Leather' was released.

In March 2007, she released her version of The Eagles' 'Desperado', followed by the release of her autobiography entitled 'Unzipped'. 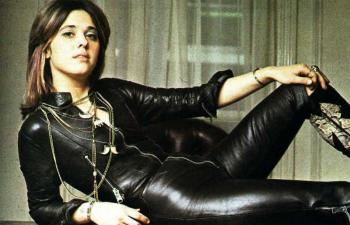