BBC daytime TV cooking programme, which was first aired in 1994. The programme was hosted by Fern Britton from 1994 until 2000. From 2001, celebrity chef Ainsley Harriott became the new host.
The basic format of the show is that two people provide two celebrity chefs with a bag of ingredients they have bought, usually to a set budget of £5. Occasionally the permitted budget is increased: a so-called Bistro Bag allows for ingredients of up to £7.50, while the Gourmet Bag may have a value of up to £10. The contestants are either members of the general public or celebrities.
The two teams are designated "red tomato" and "green pepper" (referred to as "red kitchen" and "green kitchen" after the August 2007 revamp, though the tomato and pepper motifs still feature on the guests' aprons, and in the show's logo).
The chefs then make several dishes out of the ingredients (and a generously stocked kitchen containing basic ingredients and spices) in 20 minutes, with the help of the contestants and the programme host. As the contestants taste the prepared dishes, the host asks the chef some questions about the food.
The creations are voted on by the studio audience, who hold up a card showing either a red tomato or green pepper to represent each of the teams. The winner receives a cash prize of £100, which celebrity guests donate to charity.

Kim Wilde appeared in the programme twice. On both occasions, the host was Ainsley Harriott.

Ready Steady Cook with Kim as one of the contestants 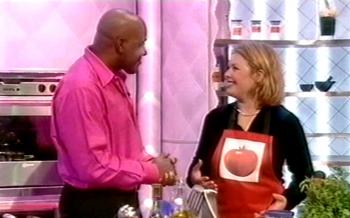