Frances Ruffelle was born on August 29, 1965 in London, England, and trained at the Sylvia Young Theatre School (founded by her mother). Ruffelle began acting at seven, and appeared in the musical Gavin the Monster when she was sixteen. In 1984 she originated the role of Dinah in the first West End production of Andrew Lloyd Webber's "Starlight Express". From there she moved on to create Eponine in Les Miserables at the age of twenty.
Ruffelle played the role in the original casts of both the London and Broadway productions of this show, winning Helen Hayes, Outer Critics Circle, Theater World, and Tony Awards. In 1988 she appeared in Mack and Mabel in Concert (along with such performers as George Hearn, Debbie Shapiro, Denis Quilley, and Georgia Brown) and Save the Children: Christmas Carols and Festive Songs (with Elaine Paige, Michael Ball, Lon Satton, Claire Moore, Julia McKenzie, Dave Willetts, and many others). Three years later she starred as Yonah in Stephen Schwartz' West End musical Children of Eden.
Since then she has released several pop singles, guest-starred on various television shows, and represented the UK in the 1994 Eurovision Song Contest. She has released a solo album of pop songs, several of which were co-written by Ruffelle herself.
In June of 1996 she returned to the London cast of Les Mis as Eponine for eight months.
Frances performed backing vocals on Kim Wilde's 1992 album Love is on the songs Love is holy, I won't change the way that I feel, A miracle's coming.
Frances has released a total of three solo albums. She has also sung on the original soundtracks for "Les Miserables" and "Children of Eden". Other credits include Terence Rattigan's "The Prince and the Showgirl" with Omar Sharif, at the Chichester Festival Theatre, Dinah in "Starlight Express" (Apollo Victoria Theatre), Yonah in "Children of Eden" (Prince Edward Theatre), Delilah in "Apples" with Ian Dury (Royal Court Theatre), and for Andrew Lloyd Webber's Sydmonton Festival she played Betty Shaefer in "Sunset Boulevard" and Candy in "Whistle Down the Wind", and most recently an extended spell in the West End as Roxy Hart in "Chicago".
Frances Ruffelle married director John Caird in 1990; a couple of years later, the two separated. They have two children, Eliza and Nathaniel; Ruffelle had a third child, Felix, in mid-1995 with her then-boyfriend Rob Manley. 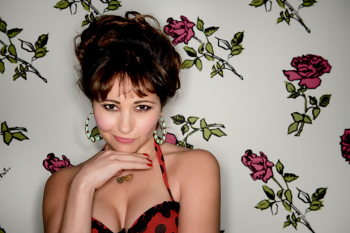