Born 22 June 1948, Philadelphia, Pennsylvania, USA.
One of rock's eccentric talents, Rundgren began his career in local bar-band Woody's Truck Stop, before forming the Nazz in 1967. This acclaimed quartet completed three albums of anglophile pop/rock before disintegrating in 1970. Rundgren sought solace as an engineer (his credits included "Stage fright" by The Band) before recording "Runt", a name derived from his nickname. Brothers Hunt and Tony Sales (drums and bass respectively), later of Tin Machine, joined the artist on a set deftly combining technical expertise with his love of melody. This exceptionally accomplished album spawned a US Top 20 hit in "We Got To Get You A Woman" and paved the way for the equally charming "The ballad of Todd Rundgren". However, it was with "Something/anything?" that this performer truly flourished. The first three sides were entirely his own creation - as writer, singer, musician and producer - and contained some of Rundgren's most popular songs, including I Saw The Light and It Wouldn't Have Made Any Difference. Although the final side was devoted to an indulgent ?pop opera?, the set is rightly regarded as one of the landmark releases of the early '70s. "A wizard, a true star" offered a similarly dazzling array of styles, ranging from a suite of short song-snippets to a medley of soul ballads, including I'm So Proud and Ooh Baby Baby. "Todd", a second double-set, proved equally ambitious. He then formed Utopia, a progressive rock ensemble which initially featured three musicians on keyboards/synthesizers (Moogy Klingman, M. Frog Labat and Ralph Shuckett) John Seigler, then Kasim Sulton, (bass) and John Wilcox (drums). Although Roger Powell latterly assumed all keyboard duties, the group's penchant for lengthy instrumental interludes and semi-mystical overtones remained intact.

A popular live attraction, Utopia taxed the loyalties of Rundgren aficionados, particularly when their unrepentant self-indulgence encroached into the artist's 'solo' work, notably on "Initiation". "Faithful" did reflect a return to pop with Love Of The Common Man and The Verb To Love, while acknowledging Todd's inspirational roots with note-for-note remakes of several '60s classics, including If Six Was Nine (Jimi Hendrix), Good Vibrations (the Beach Boys) and Strawberry Fields Forever (the Beatles). In 1977 Utopia released "Ra" and "Oops! Wrong planet", the latter of which had Rundgren taking a less prominent role. He nonetheless maintained a frenetic workload and having already established his credentials as a producer with the New York Dolls, Grand Funk Railroad and Hall & Oates, commenced work on Meat Loaf's "Bat out of hell", which has since become one of the best-selling albums of all time. The artist also began recording "Hermit of Mink Hollow", a superb set recalling the grasp of pop offered on "Something/anything?" and deservedly lauded by critics. This album featured the track Lucky Guy, later to be covered by Kim Wilde.

Rundgren entered the '80s determined to continue his eclectic path. Utopia's "Deface the music" was a dazzling pastiche of Beatles' music from I Wanna Hold Your Hand to Tomorrow Never Knows while another solo set, "Healing", flirted with ambient styles. His earlier profligacy lessened as the decade progressed but retained the capacity to surprise, most notably on the inventive "A capella". Production work for XTC joined later recordings in proving his many talents have remained as true as ever.

I have been a big fan of Todd Rundgren for some years now. He inspired me to write my own songs. I love the humour of his lyrics, his inventive melodies and, of course, his amazing voice. A genius in every sense of the word, a wizard. 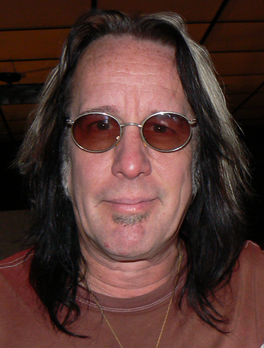 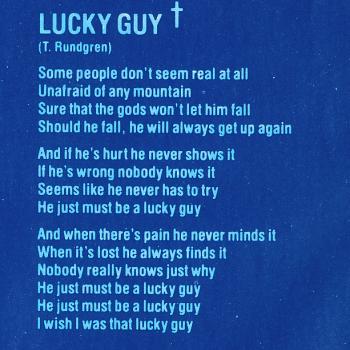