For a year, this theatre at Shaftesbury Avenue in London was the place where the musical Tommy was performed, starring Paul Keating and Kim Wilde. As a result, the theatre was under siege of Kim Wilde fans hoping to get a glimpse of their idol at the artists' entrance. Events there were seemingly chaotic, but often very disciplined as well.

The last new theatre to be built on Shaftesbury Avenue, the Princes Theatre (as it was originally called) opened in 1911 with a production of The Three Musketeers. The flamboyant splendour of the auditorium, designed by Bertie Crewe was regarded as a masterpiece in the 1900's.
The original colour scheme of creme and gold was enhanced by the lavish use of rose and white marble (still evident either side of the Royal and Grand Circles in the building) and gold mosaic (now only remaining in the foyer). The saucer-domed ceiling was originally ornamented with a life-like sky-scape and landscape paintings looked down from either side of the Grand Circle. Although all have long since been obliterated the paintings above the boxes were recreated in 1989. The statues representing Comedy, Tragedy, Music and Poetry still adorn the tops of the boxes.

In 1963 EMI bought the theatre and renamed it to Shaftesbury Theatre. On July 20th, 1973, part of the ceiling fell in. The theatre was then under the threat of redevelopment. After protests from public the building was placed on the Statutory list of buildings of Special Archistectural or Historic Interest. The theatre reopened in December 1974 with a performance of West Side Story. In 1984, the Theatre of Comedy Company purchased the theatre.

In March 1996 the musical Tommy was opened in this theatre, for a running time of 11 months. 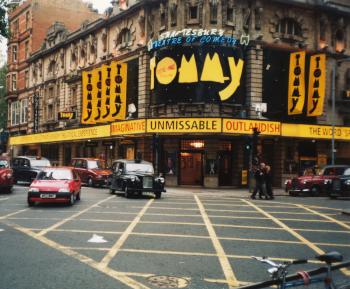 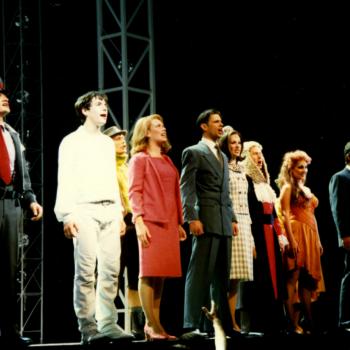