Born in 1962, Ruth was a childhood friend of Kim's. At a very young age, she started to suffer from the rare disease Friedreich's Ataxia. Kim has since committed herself to raising funds to go into research.

Our families moved to Tewin in Hertfordshire at the same time in July 1969. Ruth was seven and I was nine. I remember all of us running around, my brother Ricky and Ruth's brother John. We made a happy group playing in each other's gardens. We soon noticed a change in Ruth as she became increasingly wobbly. She was diagnosed with the nervous disease affecting the muscles, Friedreich's ataxia.
Some of the children at school were cruel to Ruth, and laughed at her as she tried to keep up with us all. It must have been extremely frustrating for her. By 16 Ruth was in a wheelchair but she never complained. As the years passed and her friends began to have boyfriends and eventually marry, she delighted in their children.
Ruth became increasingly interested in reading and writing. Her story ?No Chair for Donna' is a clever and funny reversal of disablement where the able bodied are deprived. It won a competition after which it was acted and turned into a video.
She wrote under extremely difficult conditions, storing her stories and poems in her head until someone could write them down for her. Gradually her eyesight and hearing failed, and she died eventually of cancer in 1998. Ruth never gave up on life, and appreciated that true beauty comes from inside. She was an inspiration to me and to everyone who knew her. 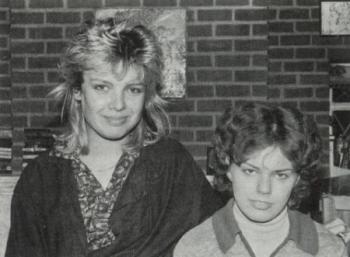