One of America's best-known performers was born as Francis Albert Sinatra in Hoboken, New Jersey, USA on 12 December 1915. After working for a while in the office of a local newspaper, The Jersey Observer, Frank Sinatra decided to pursue a career as a singer. Already an admirer of Bing Crosby, he was impelled to pursue this course after attending a 1933 Crosby concert, and sang whenever and wherever he could, working locally in clubs and bars. Then, in 1935 he entered a popular US radio talent show, 'Major Bowes Amateur Hour'. Also on the show was a singing trio, and the four young men found themselves teamed together by the no-nonsense promoter. The ad-hoc teaming worked, and the group, renamed 'The Hoboken Four', won first prize. Resulting from this came a succession of concert dates with the Major Bowes travelling show, along with club and occasional radio dates. By 1938 Sinatra was singing on several shows on each of a half-dozen radio stations. Among the bands with which he performed was one led by songwriter Harold Arlen but in 1939, shortly after he married his childhood sweetheart, Nancy Barbato, he was heard and hired by Harry James who had only recently formed his own big band. James recognised Sinatra's talent from the start and also identified the source of his determination to succeed, his massive self-confidence and powerful ego. During their brief association, James remarked to an interviewer, 'His name is Sinatra, and he considers himself the greatest vocalist in the business. Get that! No one's even heard of him! He's never had a hit record, and he looks like a wet rag, but he says he's the greatest.'
In 1939 and early 1940 Sinatra made a number of records with James and began to develop a small following. His records with James included 'My Buddy' and 'All or Nothing At All'.

In 1940 Sinatra was approached with an offer by Tommy Dorsey, then leading one of the most popular swing-era bands. Only some six months had expired on Sinatra's two-year contract with James, who must have realised he was parting with a potential goldmine but he was a generous-spirited man and let the singer go. Sinatra had many successful records with Dorsey, some of which became fixtures in his repertoire. One record from this period became a major hit a few years later when the USA entered World War II. This song, recorded at Sinatra's second session with Dorsey in February 1940, was 'I'll Be Seeing You', and its lyric gained a special significance for servicemen, and the women they had left behind.
Sinatra's popularity with the young female population, achieved despite or perhaps because of his gangling unheroic and rather vulnerable appearance, prompted him to leave Dorsey and begin a solo career. In spite of the tough line taken by Dorsey over the remaining half of his five-year contract, Sinatra quit.
Within months his decision proved to be right. He had become the idol of hordes of teenage girls, his public appearances were sell-outs and his records jostled with one another for hit status. In the early '40s he had appeared in a handful of films as Dorsey's vocalist, but by the middle of the decade he began appearing in feature films as an actor-singer. By the '50s, however, Sinatra's career was in trouble; both as singer and actor he appeared to have reached the end of the road. His acting had suffered in part from the quality of material he was offered, and accepted. Nevertheless, it was his film career that was the first to revive when he landed the role of Angelo Maggio in 'From Here To Eternity' (1953) for which he won an Academy Award as Best Supporting Actor. Thereafter, he was taken seriously as an actor even if he rarely was given the same standard of role or achieved the same quality of performance. He continued to make films, usually in straight acting roles, but occasionally in musicals. Later, he appeared in an above average television movie, 'Contract On Cherry Street' (1977), and 'The First Deadly Sin' (1980).

Soon after his Oscar-winning appearance in 'From Here To Eternity', Sinatra made a comeback as a recording artist. He had been recording for Columbia where he fell out of step when changes were made to the company's musical policy and in 1953 he was signed by Capitol Records. Sinatra's first session at Capitol was arranged and conducted by Axel Stordahl whom Sinatra had known in the Dorsey band. For the next session, however, he was teamed with Nelson Riddle. Sinatra had heard the results of earlier recording sessions made by Nat 'King' Cole at Capitol on which Riddle had collaborated. Sinatra was deeply impressed by the results and some sources suggest that on joining Capitol he had asked for Riddle. The results of this partnership set Sinatra's singing career firmly in the spotlight. Over the next few years classic albums such as 'Songs for young lovers', 'This is Sinatra', 'Come fly with me' and the exceptional 'Songs for swingin' lovers' set standards for popular singers which have been rarely equalled and almost never surpassed. The two men were intensely aware of one another's talents and although critics were unanimous in their praise of Riddle, the arranger was unassumingly diffident, declaring that it was the singer's 'great talent that put him back on top'. For all Riddle's modesty, there can be little doubt that the arranger encouraged Sinatra's latent feeling for jazz which helped create the relaxed yet superbly swinging atmosphere which epitomised their work together. On his albums for Capitol, his own label Reprise, and other labels, sometimes with Riddle, other times with Robert Farnon, Neal Hefti, Gordon Jenkins, Quincy Jones, Billy May or Stordahl, Sinatra built upon his penchant for the best in American popular song, displaying a deep understanding of the wishes of composer and lyricist.
Fans old and new bought his albums in their tens of thousands and several reached the top in the Billboard charts.
Sinatra's revived career brought him more attention even than in his heyday as the bobby-soxers' idol. Much of the interest was intrusive and led to frequently acrimonious and sometimes violent clashes with reporters. With much of what is written about him stemming from a decidedly ambivalent view, the picture of the man behind the voice is often confused. Undoubtedly, his private persona is multi-faceted. He has been described by acquaintances as quick-tempered, pugnacious, sometimes vicious and capable of extreme verbal cruelty and he has often displayed serious misjudgement in the company he keeps. In marked contrast, others have categorically declared him to be enormously generous to friends in need and to individuals and organizations he believes can benefit from his personal or financial support. His political stance has changed dramatically over the years and here again his judgement seems to be flawed. At first a Democrat, he supported Roosevelt and later Kennedy with enormous enthusiasm. His ties with the Kennedy clan were close, and not always for the best of reasons. Sinatra was unceremoniously dropped by the Kennedys following revelations that he had introduced to John Kennedy a woman who became simultaneously the mistress of the President of the United States and a leading figure in the Mafia. Sinatra then became a Republican and lent his support as fund-raiser and campaigner to Richard Nixon and Ronald Reagan, apparently oblivious to their serious flaws.
In 1992, a two-part television biography, 'Sinatra', was transmitted in the US, produced by Tina Sinatra, and starring Philip Casnoff in the leading role. Almost inevitably, it topped the weekly ratings. In 1993 Capitol Records re-signed Sinatra after 30 years with Reprise Records and announced a new album as 'the recording event of the decade'. The title 'Duets' was a brilliant piece of marketing; it had Sinatra teamed with a varied all-star cast including Aretha Franklin, Carly Simon, Barbra Streisand, Tony Bennett, Natalie Cole, Kenny G and U2's Bono. A subsequent volume, Duets II, featuring artists such as Stevie Wonder, Antonio Carlos Jobim, Chrissie Hynde, Willie Nelson, Lena Horne, Gladys Knight, and Patti LaBelle, was released in 1994.
A year later, Sinatra celebrated his 80th birthday and had to come to grips with the fact that his health was deteriorating. No new recordings have been released since.

Kim Wilde has repeatedly stated her admiration for Sinatra, and grew up with some of his records being played at home. 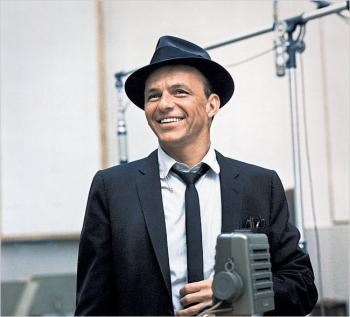