Smash Hits was a magazine, published between 1978 and 2006 every two weeks. The magazine featured interviews, reports, reviews and illustrated song lyrics of all major pop artists in that period. It was published by Emap, who also used the name for one of their digital television services, and for a digital radio station. The brand also covered the annual Smash Hits Poll Winners Party, an awards ceremony voted for by readers of the magazine.

In the early Eighties, the magazine regularly sold over 500,000 copies, with the biggest selling issue, featuring Kylie Minogue and Jason Donovan, was bought by over one million readers in 1989. The writing style of the magazine was playful, sometimes slightly cynical. It would go on to set a new standard in magazines. It is rumoured that the then Smash Hits editor David Hepworth sent a memo to record companies in 1981, saying he intended "to reverse the entire direction" of pop music publishing in favour of trivia, demanding to know the colour of their artists' socks. Hepworth - and the two editors before him - had gathered together a sharp team of writers, including Mark Ellen and Neil Tennant, who would go on to front the Pet Shop Boys. They helped shape the tongue-in-cheek style of the magazine that triumphed throughout its run.

The magazine had to stop in 2006 as a result of declining sales and a lack of 'personality' in the pop business. According to Emap director Marcus Rich, "Smash Hits revolutionised the world of teen publishing when it was launched in 1978, but 28 years later, the world is a very different place and the magazine's role and relevance on the news stand changed."

Kim Wilde was featured in Smash Hits numerous times, even appearing on the front cover a few times. A full rundown appears below. 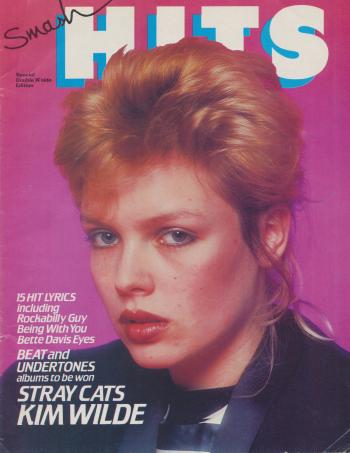