Born on 31 December 1946 in Chicago, Illinois (USA). Patti Smith was raised in New Jersey and grew up with music from the Rolling Stones, the Velvet Underground, Jimi Hendrix and James Brown. Her initial talent focussed on poetry and art. Her early writing was inspired by Arthur Rimbaud and William Burroughs, but as the '70s progressed she was increasingly drawn towards fusing her writing with rock. In 1971, Smith was accompanied by guitarist Lenny Kaye for a reading in St Mark's Church, and this duo continued to work together for three years. They were then joined by Richard Sohl (piano) in the first Patti Smith Group. Their first recording, 'Hey Joe/Piss Factory', was in part financed by photographer Robert Mappelthorpe, who later made the portraits for Patti's album sleeves. By 1974 the unit had become one of the most popular acts at New York's CBGB's club. Ivan Kral (bass) and J.D. Daugherty (drums) were then added to the line-up featured on the critically acclaimed album 'Horses'.

However, its follow-up 'Radio Ethiopia' was perceived as self-indulgent and the artist's career was further undermined when she incurred a broken neck upon falling offstage early in 1977. A lengthy recuperation ensued but Smith re-emerged in July with a series of excellent concerts and the following year scored considerable commercial success with 'Easter'. This powerful set included Because The Night, co-written with Bruce Springsteen, which reached the top 5 singles chart in the UK, but the next album, 'Wave' failed to sustain such acclaim. Patti then married former MC 5 guitarist Fred Sonic Smith, and retired from active performing for much of the '80s. She resumed recording in 1988 with 'Dream of Life', which contained the artist's customary call-to-arms idealism (People Have The Power) and respect for rock and poetic tradition.

Patti stepped into the limelight after her husband died in the early 1990's. She recorded the album 'Gone again', again a highly acclaimed album. 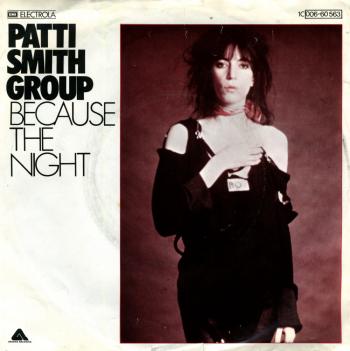