Peter Karlsson formed Sneaky Pete & Cool Cats in Sweden in 1993. He was introduced to showbizz by his brother, Mats Karlsson, who was playing the upright bass in a band he had formed with Benny Melin (lead guitar). They were rockabillies and tried hard to sound like Stray Cats, Johnny & The Roccos, Restless and also like the regular Fifties heroes. Along with Roger Johansson (drums) and Tommy Johansson (guitar), they had made a couple of apperances at a local pub. The kids seemed to like it, and so did Peter. Since the line-up was completed things developed, and soon the band was busy playing more gigs along the Swedish west coast. 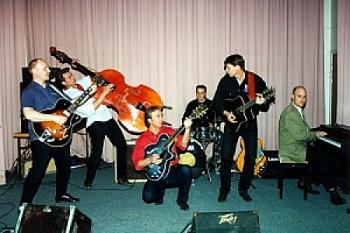