The group's debut album included the song Born to be wild which reached number 2 in the US and UK charts. This rebellious anthem was written by Dennis Edmonton (Mars Bonfire), guitarist in Sparrow and brother of drummer Jerry. It was featured in the famous opening sequence of the film Easy Rider and has since acquired classic status. Steppenwolf actively cultivated their menacing, hard-rock image.
Newcomers Larry Byrom (guitar) and Nick St. Nicholas (Born 28 September 1943, Hamburg, Germany; bass), former members of Time, were featured on the album "Monster", a concept album based on Kay's view of America in 1970.

Further changes undermined their cohesion, and later versions seemed content to further a spurious biker image, rather than enlarge on earlier achievements. John Kay dissolved the band in 1972, but his solo career proved inconclusive and within two years he was leading a reconstituted Steppenwolf. The singer has left and reformed his creation several times over the ensuing years, but has been unable to repeat former glories. 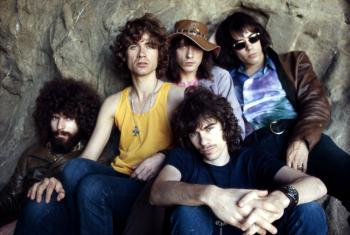