Stereoblonde is a German band, which started out playing live on October 19, 1998. Sabrina Winter (born February 3, 1969 in Offenbach, Germany) became a huge fan of Kim Wilde as a teenager. Influenced by her music Sabrina started singing and songwriting herself.
She formed her band Stereoblonde in 1998 together with Andy Fehn. They released their debut album 'Confidential' in 2000 on EastWest Records (Warner Music). The song 'Top of the world' became a radio hit in Germany. Stereoblonde toured with artists such as Echo & the Bunnymen, Amanda Marshall, Hazel O'Connor, Toto and many others.

When Andy and Sabrina parted ways, Sabrina continued with the Stereoblonde name. Since 2004 she is supported live by Frank Rill (guitar), Mark Rill (bass) and Jens "Bex" Becker (drums).

Meanwhile, Sabrina & Kim became close friends over the years and finally in 2006 Sabrina's biggest dream came true: she did backing vocals for Kim Wilde at the 'RTL Stars for free' open air festival in Berlin. She also performed with Kim in Salzburg at the Galanacht des Sports and at the Schwedenfest in Wismar in 2007. In November 2007 Sabrina and Frank supported the 'Perfect Girl Tour - part 2' in Germany for the first half of the shows.

In 2011, Stereoblonde released the single 'Sweetest of all darlings', a single dedicated to Kim Wilde and written on the occasion of Kim's 50th birthday the year before. On March 15, 2012, Stereoblonde appeared as the first of two support acts before Kim Wilde's concert at the Columbiahalle as part of the 'Snapshots & Greatest Hits' tour. 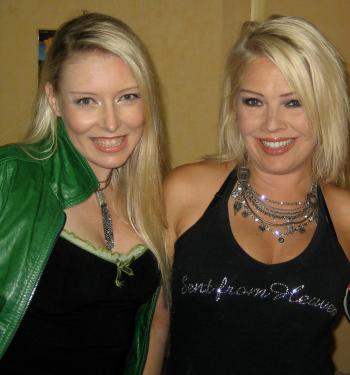