James Stevenson was still in school when he joined Chelsea, a punk band that had previously employed William Broad (a.k.a. Billy Idol), John Towe and Tony James. They went on to form the punk band Generation X.
James joined Chelsea in April 1977 and played guitar on their first single 'Right to work', released on 1 June 1977, and during the first of Chelsea's BBC Radio 1 sessions. Stevenson continued to work with Chelsea for three years, but by the end of 1980 he joined Generation X. Following the demise of Generation X in 1981, he went on to spend a year in Kim Wilde's band. He played guitar on her debut album Kim Wilde and appeared in many TV performances with her. He is even spotted in the videos for Kids in America and Chequered Love.
After this, he formed Hot Club with former Sex pistol Glen Matlock. in 1985 he joined Gene Loves Jezebel, with whom he still works, co-writing most of their hits. He has also played on many records including Tricky's debut album Maxinquaye. In 1994 he was invited by his old friend Billy Duffy to join The Cult's forthcoming world tour as a second guitarist. He has also worked live with The Alarm's Mike Peters. He has also shown up on albums by pop artists such as Jimmy Nail and Louise.

You were in the "promotional" band of Kim Wilde for her mega-hit 'Kids in America' period, in the time pre-Gene Loves Jezebel and after Gen X, right? Now, how do you look back at the period? Were you just a hired hand, or do you feel you were able to contribute ideas and help her establish a presence, since she didn't have a band at the time of the recording (I believe)?
James: I played on a few tracks on the first and second albums, but I was very much a hired gun – by Mickie Most, not Kim. Though I loved Kim – she's really one of the boys and drank me under the table more than once! But I missed playing live. All I did with Kim was TV shows, that's why I put Hot Club together with Glen Matlock. I did all the guitar soloing at the end of 'Water On Glass'. I remember being quite proud of it at the time. (Source: David Ensminger, Mavericks of Sound: Conversations with Artists Who Shaped Indie and Roots Music. London, Rowman & Littlefield, cop. 2014. ISBN 978-1-4422-3590-8) 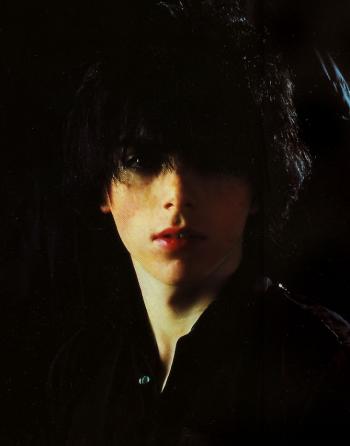