Top of the Pops

Top of the Pops, also known as TOTP, is a long-running British music chart television programme, made and broadcast by the BBC. It was originally shown each week, mostly on BBC 1.

Top of the Pops began on New Year's Day 1964 in Studio A in Longsight, Manchester, which the BBC had bought from Mancunian Films in 1954. DJ Jimmy Savile presented the first show. The show was originally intended to have only a few programmes but ran for over 42 years, reaching landmark episodes of 1000 and 2000 in 1983 and 2002 respectively. During its heyday in the 1970s, it attracted 15 million viewers each week. It was traditionally shown on a Thursday night, but was moved to a Friday starting on 14 June 1996.

The show saw many changes through the decades, in style, design, fashion and taste. It periodically (usually every three years) had some aspect of its idents, format, or set design altered in some way, keeping the show looking modern despite its age. The show was closely associated with the BBC radio station Radio 1, usually being presented by DJs from the station.

In the mid-1990s, BBC Radio 1 producer Ric Blaxill was brought in to revamp the show. Blaxill handed presenting duties to a different celebrity each week. Presenters during this period included Kylie Minogue, 2 Unlimited, Chris Evans, Chris Eubank, Damon Albarn and Jarvis Cocker.
In 2003, the show was again overhauled. In a break with the previous format, the show played more up-and-coming tracks ahead of any chart success, and also featured interviews with artists. The new show, hosted by MTV presenter Tim Kash launched to hit ratings and continued to pull in big name artists and film stars. After a year the show was then hosted by Reggie Yates and Fearne Cotton every Friday night until 8 July 2005. The final Top of the Pops was broadcast 30 July 2006.

Starting in 1994, there was also a spin-off series known as TOTP2 (or Top of the Pops 2). It continued to run months after its predecessor had been axed.

Top of the Pops has also been made available to television broadcasters in many different countries in the form of a franchise package. However, after some success, the majority of these have now also been cancelled.

Top of the pops performances by Kim Wilde

Kim Wilde in Top of the pops 2

Kim Wilde in German Top of the pops

Kim Wilde in Dutch Top of the pops 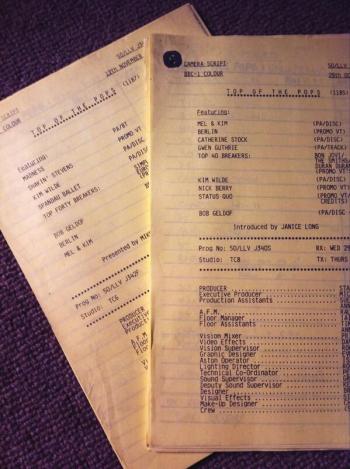 Original Top of the Pops scripts, posted on Twitter by Kim 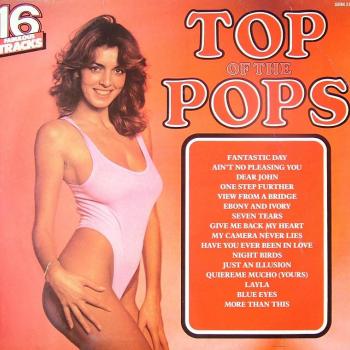